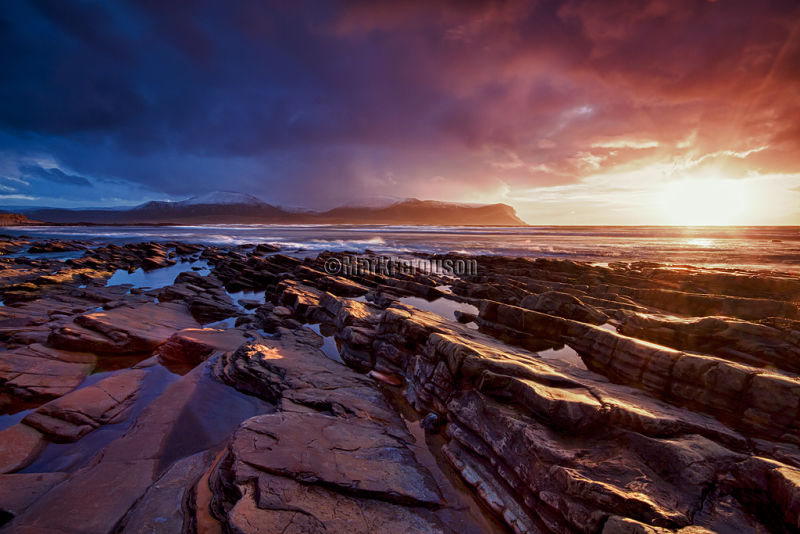 Warebeth beach, just north of Stromness on the west mainland of Orkney, has a spectacular outlook towards the island of Hoy. On a winter's afternoon, and with the right light conditions, dramatic 'into the light' shots can be had as the sun dips down into the Atlantic horizon just to the west of the Kame cliffs of Hoy. Warebeth enjoys both a sandy and a rocky beach, but during the winter months a lot of seaweed gathers on the sandy foreshore. When it is like this, I concentrate on capturing the distinctive rock formations on the northern side of the beach.

For my forays to the west coast, ideally I'm looking for a bright but not too windy day with a scattering of showers from the west. These conditions lend themselves to fleeting but dramatic glimpses of sparkling sunlight between showers. At least this is the theory; and with this in mind I headed out on my mountain bike, with kit in panniers, to Warebeth one February afternoon. There were showers around (and I did get wet although my kit stayed dry) and on arrival I noticed a gathering storm cloud right over Hoy, whilst Warebeth was bathed in dramatic late afternoon sunlight. Hastily I set up on the northern shore and used the rocky shoreline as a natural lead-in line towards Hoy. I had about a minute to expose before the sun hid behind another cloud. On a tripod I used my Canon 7D and Sigma 10-20mm lens set at 11mm. I used ‘live view’ with the following settings: iso 100, 0.8sec, f18 and focussed about a third into the image to retain front-to-back sharpness. I also used a 2-stop neutral density filter to slow the shutter speed sufficiently to create a slight blurred-water effect. I also used a 3-stop neutral density hard grad filter to balance the bright sky with the foreground. Checking the histogram, I noticed I had a balanced exposure with no major clipping of highlights or shadows and so was optimistic I had captured a well-exposed image. All was not perfect, however, as I noticed I was picking up some flare and spray specks on my lens, so all I could do was hope I could alleviate this in post-production. I had no second chances as the gathering storm clouds soon put paid to any further photography, and so I decided to pack up and cycle back to base with the benefit of a stiff tailwind.

Back at the computer, I uploaded my images and spent some time cloning out the spray specks and lens flare. As the specks were only small ones, this was relatively easy – but time-consuming. (Generally, I'm not an advocate of cloning in landscape shots; but in this instance I wasn’t altering any aspect of the landscape to suit my composition and so had no qualms about it.) I performed minor adjustments in Photoshop, using curves together with dodge and burn tools. I was content with my day's efforts: the final image, I believe, shows how dramatic this location can be in the right light conditions.
Next
Previous