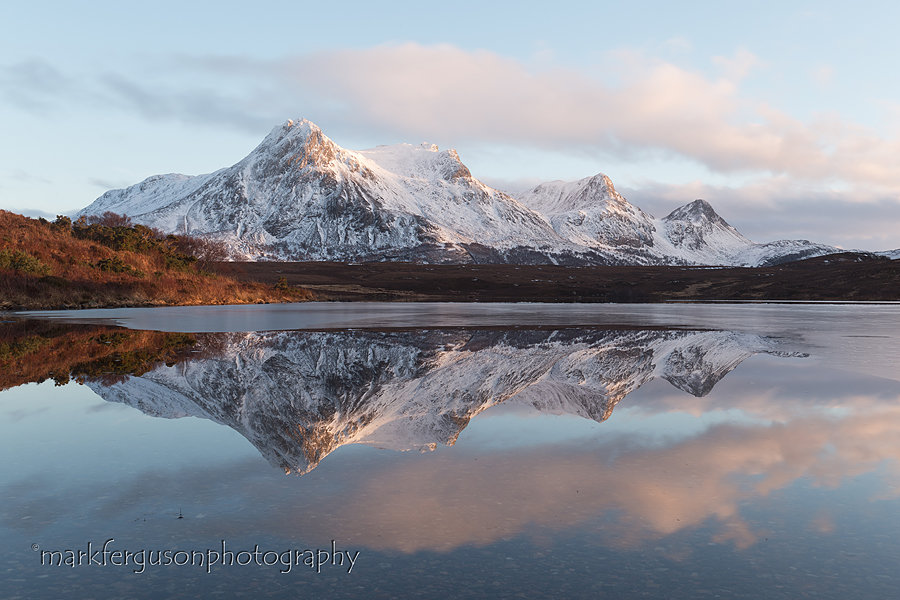 Ben Loyal
The granite peak of Ben Loyal, often referred to as the Queen of the Scottish Mountains, sits imposingly on the north coast of Sutherland near the village of Tongue. It’s 4 rocky peaks of which An Caisteal is the highest at 764m give a distinctive almost alpine appearance viewed from the north. A few miles to the west sits Ben Hope, Scotland’s most northerly munro and the whole area which includes the Kyle of Tongue is designated a national scenic area.
As the best views of the mountain are from the north I decided it made sense to plan any photography trip in late winter or spring which offered the potential of snow and side lighting in the morning or late afternoon. In March of last year after the ‘beast from the east’ had deposited a covering a snow across the UK I decided this was the opportunity I had been waiting for and made the short trip from my home in Orkney.
Immediately to the north of Ben Loyal and near a single track road lies Lochan Hakel and I knew some of best views would be from there so I cycled 3 miles from Tongue and then did the short walk to the lochside. The day had been a mixture of brief sleet showers and fresh westerly winds and on arrival at the loch another squally shower was underway. Ben Loyal was obscured behind a sheet of rain and sleet and the wind pushed ripples across the grey loch. With the expectation the shower would pass I decided to persevere and look for a lochside location which offered me the best viewpoint for the whole mountain. I knew sunset was due just after 6pm and as it was now 530pm with no sign of a break in the showers I had resigned myself to not seeing any good sunlight on the west side of the mountain. Suddenly the wind completely dropped to calm and shortly after the clouds, with no wind to drive them, faded away to leave a scene which I could not have imagined 10 minutes earlier. The greys were replaced by the vibrant colours of a setting sun on Ben Loyal and the rippled loch surface was smoothing down to a glassy calm. Excitedly I fired off a few hand held frames but quickly decided a few shots with a longer shutter speed would produce the most pleasing results so using my tripod and a 4 stop ND filter together with a large F/22 aperture I managed to get the shutter down to 4 seconds. This allowed me to smooth out any minor ripples on surface and accentuate those sunlit clouds hovering above the peak. This golden light and reflection lasted no more than 5 minutes before the sun set to the west. I can’t imagine how I would have felt had I given up earlier with the knowledge of missing this light.