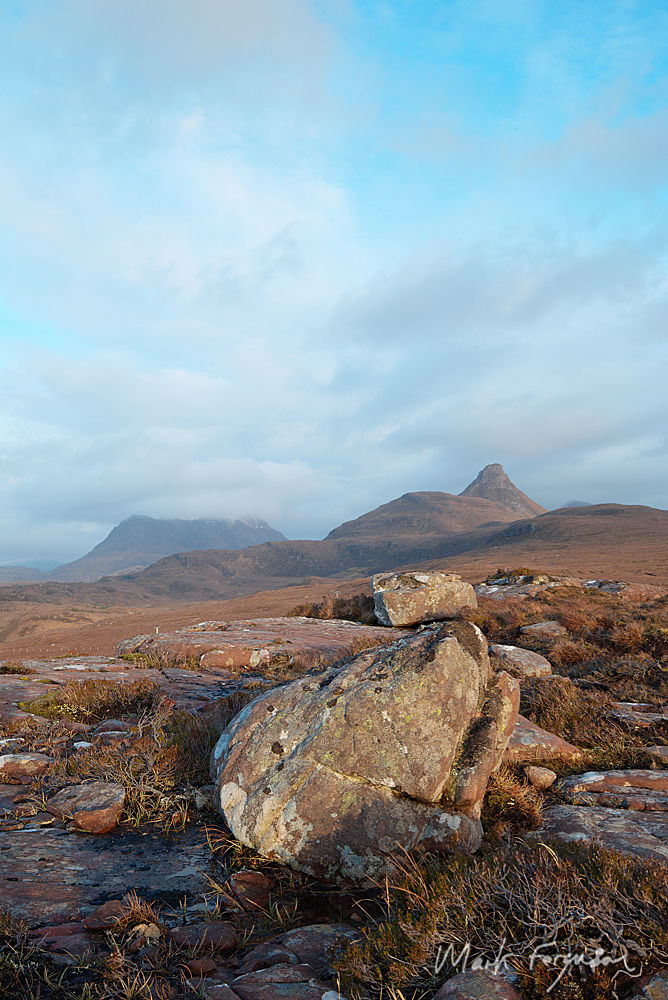 Stac Pollaidh from Drium Bad a Ghaill
Inverpolly in Northern Wester Ross is an area of wild landscape containing distinctive mountains rising up above a lochan strewn boggy floor. Each mountain has its own peculiar profile : some jagged and precipitous like Stac Pollaidh and Suilven and others more rounded like Cul Mor and Canisp.
Photographically I prefer the winter months in this area as the russet browns of dying vegetation and dark blues of the lochs make for an appealing colour palette. Often as well, as a bonus, the mountains will have a covering of snow. It is with this in mind that I decided to spend a photographic weekend in Inverpolly in March 2018.
I have been trying for a few years to capture Stac Pollaidh mountain in attractive winter light but have been thwarted by grey skies and rain. On this particular visit I decided to give the mountain another go and having recced the best locations previously planned to walk to a rocky outcrop to the west of Stac Pollaidh which offered some foreground interest. I parked the car at the Stac Pollaidh car park and cycled up the Lochinver road for a mile from where I headed west into the moorland. I was glad I had recced the location previously as there was not a lot of foreground interest to counter the rough moorland. The weather conditions were once again poor with frequent blustery light showers and cloudy skies. Knowing that the light in the winter can change dramatically during showery weather I didn’t give up completely so continued to set up my camera. With my 16-35mm lens I experimented with different compositions until I decided 29mm would allow me to capture the foreround boulders without the mountains seeming too distant. To get a good depth of field I used a relatively small aperture of f11 which gave me a shutter speed of1/20 so I placed my camera on a tripod. Suddenly through a fleeting gap in the shower clouds warm winter light bathed the landscape and I fired off some landscape and portrait shots looking towards Stac Pollaidh and Cul Beag mountains. I tried the same shots at different focal points with the intention of combining images later to increase my depth of field. Within a few minutes the warm winter light was replaced by steely grey skies and my very short session was over but I was hopeful I had a worthwhile shot. My final image is a combination of 2 exposures, one focussed on the foreground rocks and the other on the mountains.